Mobile Wallets, Non-Banking Firms can now use Aadhaar for e-KYC 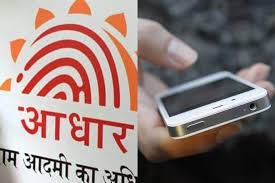 Digital lending startups and mobile wallets that were struggling to comply with the customer verification banking guidelines, the government of India has allowed non-banking firms to verify customer data through the Aadhaar database fore-KYC authentication.
Upon the rules laid down by the government, if non-banking entities that are bound by the Section 11A of the Prevention Of Money Laundering Act, 2002 follow Aadhaar’s privacy and security standards. The government considers giving them access to biometric based database.
Process To Follow To Access Aadhaar Database :-
As of financial regulators, press note on May 9th, including Governor of the Reserve Bank of India (RBI) and chairman of the Securities and Exchange Board of India (Sebi), lays down a three-step process that “reporting entities”  such as  mobile wallets, non banking , stockbrokers need to follow to get clearance to access the Aadhaar database.
Seek Sanction From Sector Regulator
Payment and Lending companies must seek permission from RBI
Whereas, broking entities will require a sanction from SEBI
Apply To UIDAI
Once the regulator grants permission, these entities can apply to the Unique Identification Authority of India(UIDAI).
Privacy And Security Examination.
The request for information will then be sent to the finance ministry if the exam is passed.
The eKYC facility is essential for companies that are looking to onboard customers digitally. However, following the Supreme Court ruling in September 2018, which struck down provisions in the Aadhaar Act  allowing private entities from accessing Aadhaar, these companies have been forced to move to paper-based processes for customer verification.
After passing the Aadhar Ordinance Act, earlier this year, banks and telecommunications have been allowed to access the Aadhaar details of customers who voluntarily agree to share it
But other entities such as mobile wallets are still struggling as Central Bank furthers instructs them to capture full details of their customers to keep the accounts operational.
Benefits
Challenges To Be Faced