Today Festival in india - Meniya.in March 08, 2020
A Tiger in India Walks 2000 KM to Find a Suitable Partner and Prey

A few years ago tigers were threatened in India and faced extinction. What followed was an unforeseen strive from the government to save the wild exotic wild animal. The save tiger campaign was successful and what we’re witnessing now is a great opportunity to look into the behaviors of the wonderful animal. In a recent tracking by forest authorities in India, a tiger was known to travel 2000 Km (New record) to find a suitable mate and prey.

This #Tiger from India after walking into records has settled to Dnyanganga forest. He walked for 2000 Kms through canals, fields, forest, roads & no conflict recorded. Resting in daytime & walking in night all for finding a suitable partner. Was being continuously monitored. 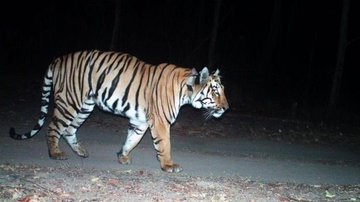 The tiger is tagged by a collar in the neck and made a 2,000 Kms journey through canals, fields, forest, roads and there were no unwanted conflicts (human contact) were recorded.

The tiger walked all night long while rested during the day as per the forest official. Earlier the longest walk for the same tiger was reported to be 1300KM by BBC. The news was shared by Parveen Kaswan, an Indian Forest Service officer, through his Twitter handle. Kaswan, with 87.5K followers on the social media platform often tweets on nature and wildlife.

A #tiger has just walked into record books. Undertaken longest walk ever recorded in #India of 1,300km in five months.

In search of prey, territory or a mate he is crossing #roads, fields, #canals etc. Without harming anybody. Closely monitored by dept. Wonders of #Nature. 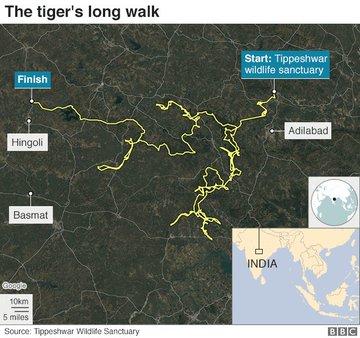 With a total distance covered topping 2,000 Kms, the tiger has traveled more than any other from his species already. Wildlife officials say the big cat has not traveled in a “linear manner”. He is being tracked through GPS satellite information every hour and has been recorded in more than 5,000 locations in the past nine months while setting an earlier record of 1,300 Kms.


THE TIGER, CALLED C1, WAS ONE OF THREE MALE CUBS BORN TO T1, A FEMALE TIGER IN TIPESHWAR WILDLIFE SANCTUARY, HOME TO 10 TIGERS IN MAHARASHTRA STATE

“The tiger is possibly looking for territory, food, and a mate. Most of the potential tiger areas in India are full and new tigers have to explore more,” Dr. Bilal Habib, a senior biologist with the Wildlife Institute of India, had earlier told the BBC.


The range for the total tiger population in the wild is estimated between 2,603-3,346. The population has increased by nearly 33% since the last census in 2014 when the total estimate was 2,226.

Maharashtra, at 312, has the fourth-highest tiger population in the country, following Madhya Pradesh (526), Karnataka (524) and Uttarakhand (442).