My Official Web
Application
Google News
Get invite my WhatsApp Group
Join My Twetter Account
Join Our Instagram Accounts
Facebook Messenger
Subscribe My Channel
Join Our Telegram Channel
Home Golden Age of India India news Golden Age of India: How was it like living in a city during the times of the Gupta Empire

Golden Age of India: How was it like living in a city during the times of the Gupta Empire

Today Festival in india - Meniya.in March 08, 2020
Golden Age of India: How was it like living in a city during the times of the Gupta Empire?

Golden Age of India: Life in the Gupta Empire

Imagine a time when India alone contributed almost 1/3 to the world economy. Great mathematicians like Aryabhatt and literary genius like Kalidas were living souls, adding immensely to the literary and scientific development of a great culture. How was like it to live in a city during the times of the Gupta Empire (319 to 543 CE), The ‘Golden Age of India’?

Thanks to Fa Xian’s diaries we can uncover in great detail the experience of living in one the greatest periods in Indian history. Fa Xian was a Chinese Buddhist monk and translator who traveled by foot from Ancient China to Ancient India, visiting many sacred Buddhist sites in Central Asia, the Indian subcontinent and Southeast Asia between 399-412.
Life During the Gupta Period 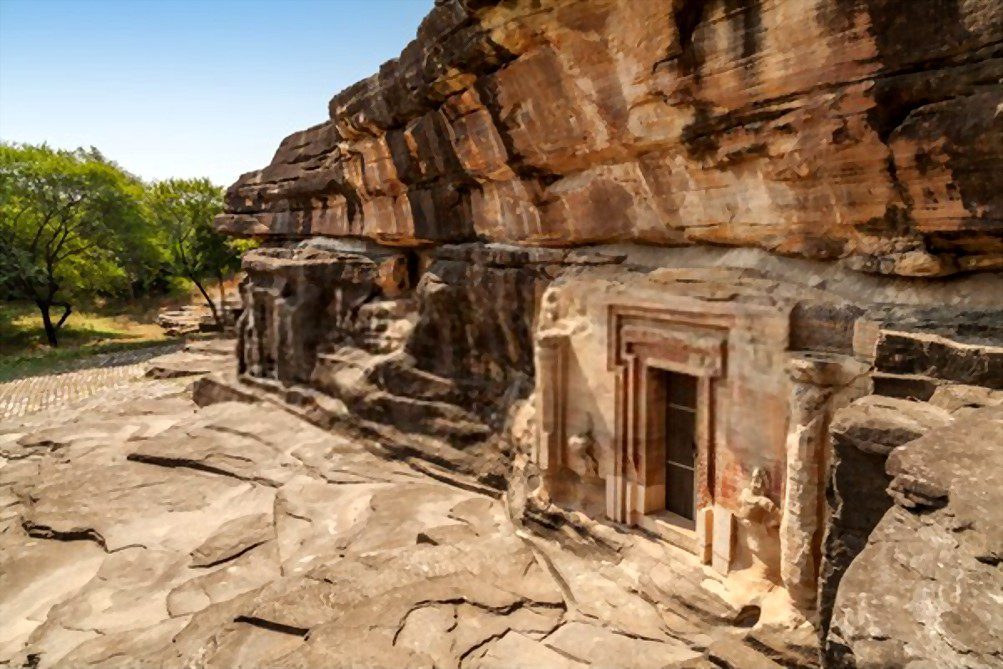 Fa Xian tells us that cities of the Gangetic plains under the Gupta dynasty were exceptionally large and prosperous. When Fa Xian visited Pataliputra, the modern-day Patna in Bihar, he saw the ruins of Ashoka’s palace that still stood in the middle of the city after six centuries.


He was so impressed by the sheer scale of the stone walls, towers, and doorways that he declared that they could not have been built by human hands. He was so fascinated by that he wondered if they were the work of supernatural creatures.

He also witnessed a festival where the people built gigantic four-wheel wagons and then erected towers on them that were five stories high. The towers were then covered in fine white linen and decorated them with canopies of embroidered silk. Fa Xian further narrates that the people placed idols of their gods within these structures and images of the Buddha on the corners of the wagons.

On the day of the festival, twenty such wagons were pulled through the city in a grand procession. Devotees from all walks of life, ranging from the royal family to the poor, participated in the festivities. They offered prayers and flowers to the gods and lit lamps in the evening.

The whole city became like a fairground with amusements and games. On this very day, the rich made generous alms to the poor and ancient physicians ran free health camps for the poor, unparalleled in the ancient world.
Rath Yatra still celebrated today, unchanged from Gupta period 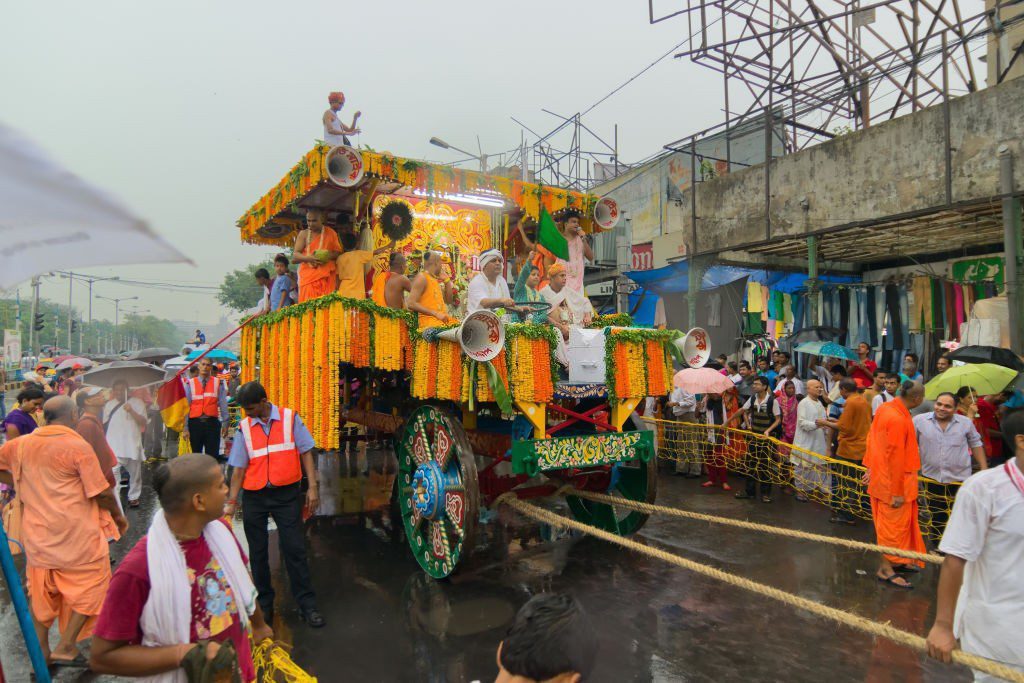 Clearly, the festival described is the Rath Yatra or Chariot Festival. Interestingly the festival is still celebrated by Hindus in many parts of the country. The most famous is the one held in honor of Lord Jagannath in Puri, Orissa.


If you compare Fa Xian’s description with modern Rath Yatra, the festival has survived almost unchanged since Gupta times. The only significant exception is that Buddhists used to actively participate in this event during the ‘Golden Age of India’. Indeed, it appears that the popular practice of Buddhism and Hinduism overlapped during the Gupta period (319 to 543 CE). This relationship remains alive in all religions originating from India (Indic religions). 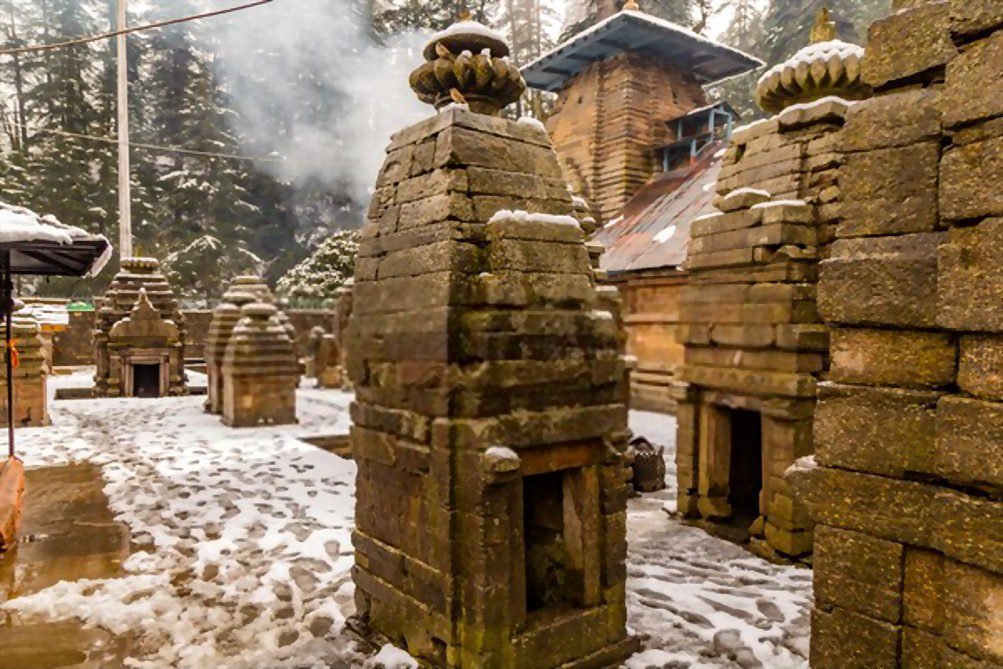 Almost all Gupta emperors invested heavily in intellectual and artistic excellence. It was during their rule that the astronomer-mathematician Aryabhatta worked out that the earth was spherical and that it rotated on an axis.

He explained the various phases of the moon were due to the movement of shadows and that moon and planets shone duet to reflected light from the sun and other stars.


He even worked out a remarkably accurate estimate of the circumference of the earth and of the ratio Pi. This was achieved a thousand years before Copernicus and Galileo.
Nalanda University 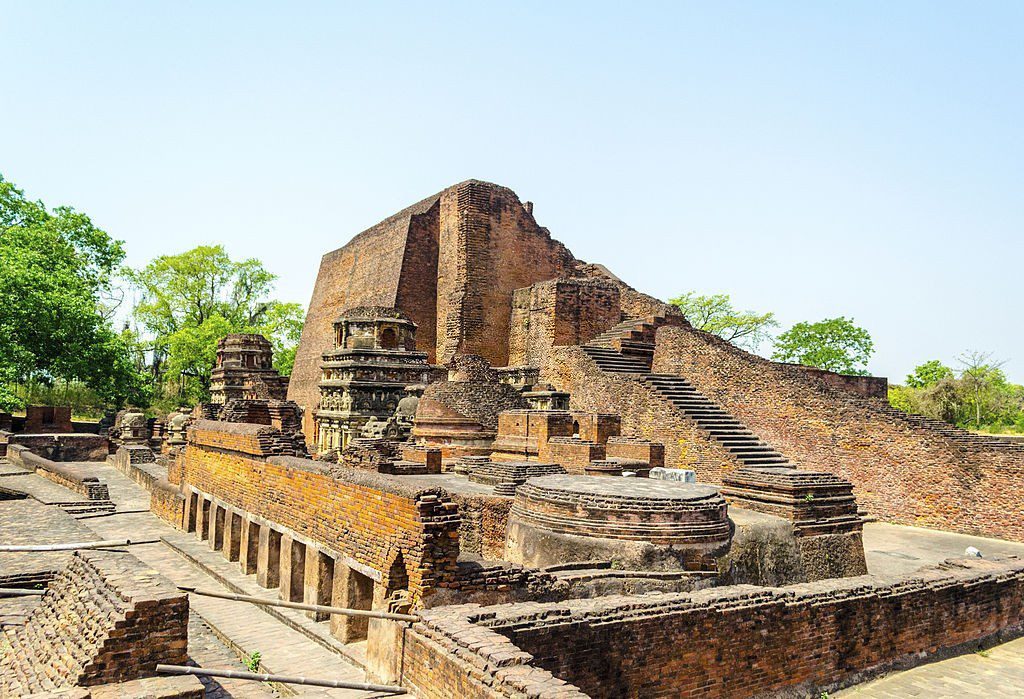 Not far from his capital Pataliputra, Emperor Kumaragupta founded Nalanda University, which will later become a world-renowned hub for Buddhist studies.

Further west, the Guptas established a secondary capital in Ujjain. The city not only became an important commercial node in the Southern Road but also an important center of learning for the Hindu tradition.
Kalidas

It was in Ujjain, that Kalidasa, often called India’s Shakespeare, composed his famous works. Ujjain is today a small town in Madhya Pradesh, undistinguished except for a number of ancient temples. In the fifth century AD, however, it was a lively hub of commercial and intellectual exchange.

Late on a monsoon night, when the cool moist breeze blows, it is still possible to imagine Kalidasa composing the Meghdoota, the Messenger of the Clouds.
Kamasutra, the Treatise on Love 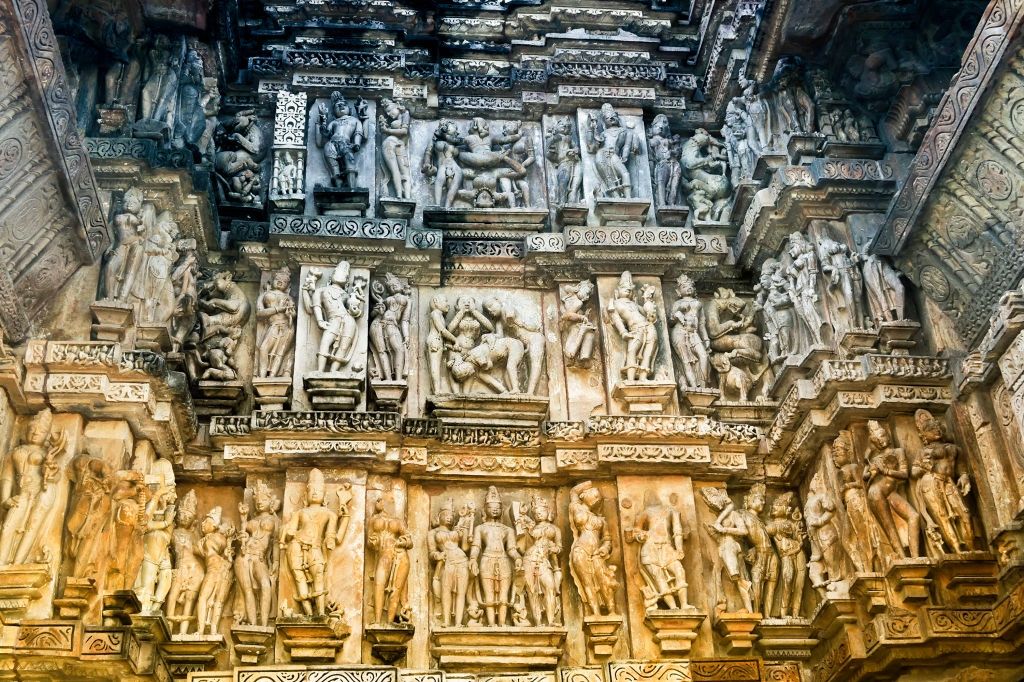 While cultural, scientific and literary efforts were so great during the period, not everything is written in this period was about high literature, science or religion.

One of the most well-known books of this period is the Kamasutra, the Treatise on Love. It is best known for its long lists of complicated sexual positions, but it also tells us a lot about the social structure and values of the time. The book suggests that at least urban attitudes were surprisingly liberal and religiously tolerant.

Although obviously written by a male, the Kamasutra is quite sensitive to the female perspective and even hints at a female readership. Most interestingly, it paints a vivid picture of the life of a rich and idle Nagaraka or ‘a man-about-town’.
Ancient Indian’s preference for dark skin 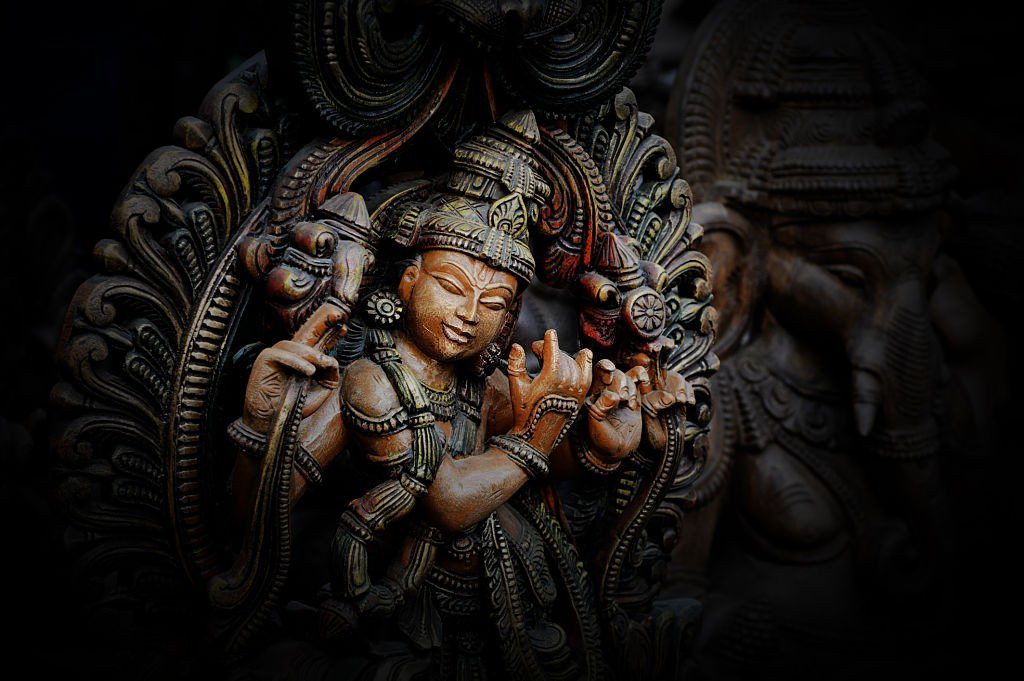 The stylized paintings and art of the Gupta period give us a sense of what Indians of this period idealized. Unlike today when most Indians prefer fairer skins as a sign of beauty, most of the people in the ancient paintings are very dark-skinned.

It appears that ancient Indians had a preference for dark skin. This is supported by a lot of other evidence. For instance, the epitome of male handsomeness in the Hindu tradition is Krishna who is clearly dark. His name literally means ‘The Dark One’ (his depiction as ‘blue-skinned’ is merely a medieval artistic innovation).

Similarly, the beautiful Draupadi, the common wife of the Pandava brothers in the Mahabharata, is also described as being very dark. This preference for dark skin appears to have survived well into the medieval period. Indeed, Marco Polo specifically mentions this in his comments about India: ‘For I assure you that the darkest man is here the most highly esteemed and considered better than others who are not so dark.

Let me add that in very truth these people portray and depict their gods and their idols black and their devils white as snow.’ One only needs to look at the idol of Lord Jagannath in Puri to see what Polo meant.

It is unclear when and why this preference switched, but it shows that the traditional Indian aesthetic was very different from how we now perceive it. This may be somewhat inconvenient to those who sell skin-whitening creams to modern Indian consumers.

Of course, Indians are not the only ones subject to changing tastes. Just five generations ago, Europeans considered pale white skin so attractive that Victorian women were willing to risk poisoning by using an arsenic-based compound to whiten their skin. Today, their descendants risk skin cancer from too much sun-bathing. Basically, you cannot win.
The legacy of the Gupta Empire 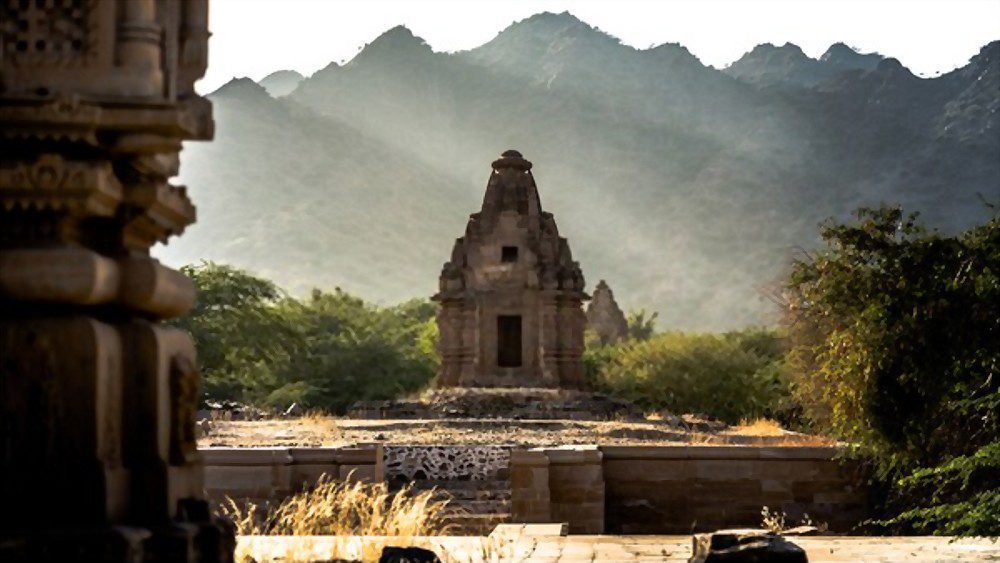 The two centuries of Gupta rule coincided with the mercantile boom, with ports on both coasts and control over major internal highways, the Gupta economy witnessed a period of exceptional prosperity. This is corroborated by Fa Xian’s diaries. Indeed, the country must have been very well-governed because, in his many years of solo wanderings, the Chinese scholar does not appear to have ever been robbed or cheated. This cannot be said of foreign travelers who visited India in subsequent centuries.

Later visitors like Xuan Zang and Ibn Batuta would all have to face armed bandits. Even today, backpacking alone like Fa Xian can be unsafe for a foreigner in many parts of the country.

Despite the numerous conquests, the Gupta empire was significantly smaller than that of the Mauryas. However, it made up for this in economic and cultural vigor. It resulted in the period being well acknowledged as the Golden Age in Indian History and will remain so for a long period of time to come.