Stand in front of the 1,200 years old temple dedicated to Lord Shiva, close your eyes for a few moments and open it. The visuals that you’ll see now are among the most magnificent visuals that a mortal can see on this earth. This for you, is one of the holiest places in Hinduism, the Kedarnath temple of Lord Shiva.

The journey to the temple is called Kedarnath Yatra (pilgrimage), which is a part of Char Dham Yatra in the Uttarakhand state of India. The Char Dahm includes other majestic places like Gangotri, Yamunotri, and Badrinath temple. All four shrines are located in the Garhwal region of Uttarkhand and are one of the major tourist and religious attractions in the state.
History and significance of Kedarnath temple 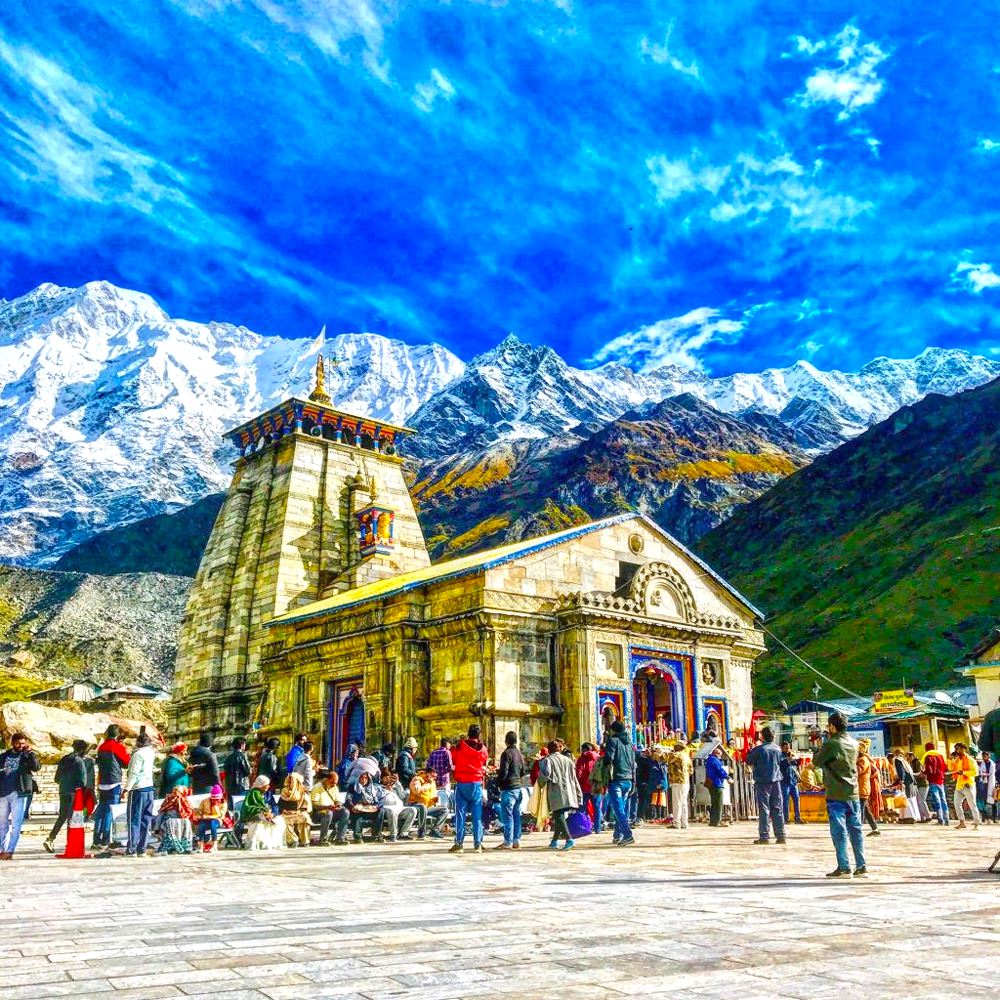 The name “Kedarnath” means “the lord of the field”, it derives from the Sanskrit words Kedara (field) and Natha (lord). The text Kashi Kedara Mahatmya states that it is called such as “the crop of liberation” grows here.


The temple, which is dedicated to Lord Shiva, is said to be more than 1,200 years old. There is a certain amount of uncertainty about who built the original Kedarnath temple and when?

The mythological account from Mahabharatadescribes the temple to be built by legendary Pandava brothers. However, the epic of Mahabharata doesn’t mention any place called Kedarnath. One of the earliest references to Kedarnath occurs in the Skanda Purana (7th-8th century), which names Kedara (Kedarnath) as the place where Shiva released the holy water from his matted hair, resulting in the formation of the Ganges river.

According to another legend, the Pandavas after defeating Kauravas in the Kurukshetra war felt guilty of having killed their own brother and elders, sought the blessings of Lord Shiva for redemption. He eluded them repeatedly and while fleeing took refuge at Kedarnath in the form of a bull.

The ruins of a monument marking the purported resting place of Shankara are located at Kedarnath. It is established that Kedarnath was a major pilgrimage center by at least the 12th century when it is mentioned in Kritya-Kalpataru( Sanskrit work dealing with jurisprudence) written by the Gahadavala minister Bhatta Lakshmidhara. 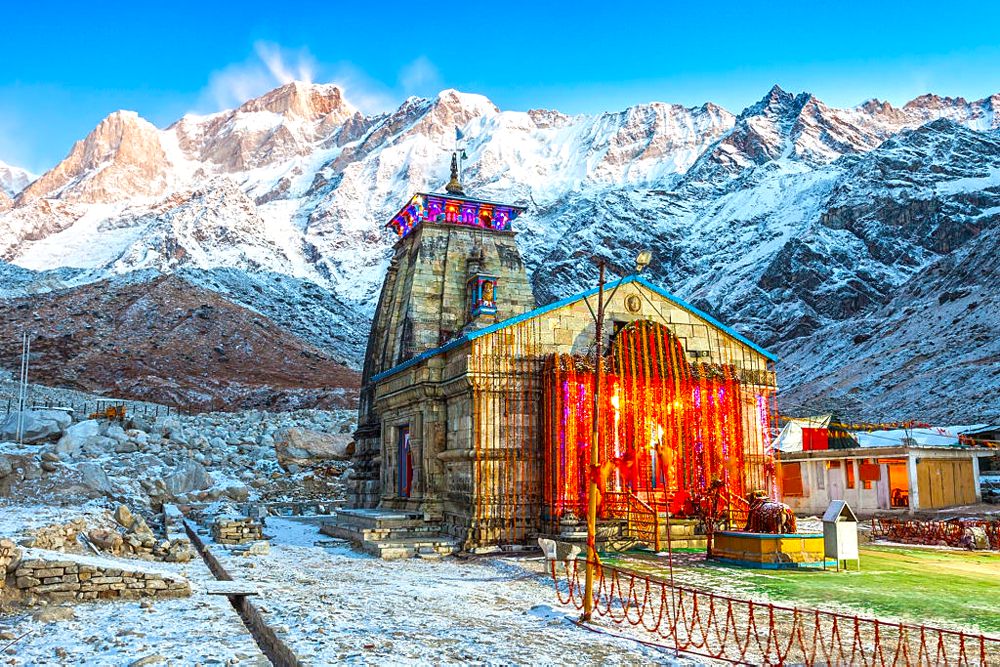 Thousands of pilgrims visit the Kedarnath temple during the pilgrimage season and the Char Dham Yatra. Kedarnath Yatra included, the Yatra is a major source of revenue for Uttarakhand’s tourism industry.

Located at a height of nearly 3,500 meters above the sea level, the Kedarnath temple remains covered in snow for the most part of the year.

The majestic Kedarnath peak (6,940 meters) stands behind the temple along with other snow-clad mountain peaks and adds to the amazing view of the surroundings.

In winters, the deity is brought down to a village called Ukhimat and the temple is closed due to the heavy presence of snow. In summer, when the weather improves, the deity is carried back to the temple amid much fanfare and rituals.
Tere are more than 200 shrines dedicated to Lord Shiva in Chamoli district itself, the most important one is Kedarnath. The temple is built from extremely large, heavy and evenly cut grey slabs of stones, it reminds of some of the engineer marvels of people to have carried such heavy slabs during that period.
Kedarnath Trek

The Kedarnath Trek is a 16km medium to steep trek which requires a good level of physical fitness. Before going for the trek every pilgrim has to get themselves medically checked for physical endurance and health requirements of the high-altitude trek.

Those incapable of the demanding trek can avail of other facilities that include the services of Palki/Dandi, Kandi & Mule/Ponies. Anyone can book these services from the booking counter at Gaurikund/Sonprayag.

The Kedarnath temple has a Garbha Griha for worship and a Mandap, suitable for assemblies of pilgrims and visitors. A conical rock formation inside the temple is worshipped as Lord Shiva in his Sadashiva form.

The inner walls of the assembly hall are decorated with figures of various deities and scenes from mythology. Outside the temple door, a large statue of the Nandi Bull stands as guard.

In 2013, the temple town was badly damaged during the Kedarnath floods which wreaked havoc across Uttarakhand. The floods were triggered by heavy rain and a breach of a massive glacial lake that was situated just above Kedarnath.

However, surprisingly the Kedarnath temple, which is built on the banks of Mandakini and the mythical Saraswati rivers, was not damaged. For visitors, the state government has arranged a night stay facility for nearly 3,000 pilgrims by constructing makeshift tents and reconstructing the damaged huts.

The Kedarnath temple closes on the first day of Kartik (October-November) and reopens in Vaishakh (April-May) every year.
Rudra Meditation Cave, Kedarnath

Made famous by pictures of Indian PM meditating in the cave, Rudra meditation cave is one of the meditating caves of Kedarnath with modern amenities. Rudra Caves, barely a kilometer from the Kedarnath shrine is maintained by the Garhwal Mandal Vikas Nigam (GMVN).

There are plans of more meditation caves in Kedarnath. For spiritual travelers, there is no scarcity of place to mediate and discover inner-self at one of the most peaceful and blissful locations on earth.

How to book meditation cave at Kedarnath?


You can visit the GMVN website and/or alternatively call on 9412045815 (M) to request a booking for Rudra meditation center also known as Rudra Gufa.

How to Travel to Kedarnath?

Trains to Rishikesh are regular. Gaurikund is well connected by motorable roads with Rishikesh. Taxis and buses are also easily available from Rishikesh to Gaurikund.

Gaurikund is the point where the road to Kedarnath ends and a trek of 16km commence. Gaurikund is well connected by motorable roads with major destinations of Uttarakhand and northern states of India. Buses to Rishikesh and Srinagar are available from ISBT Kashmiri Gate.